From a viral pandemic to the movement for racial justice to the worsening climate crisis, Senator Cory Booker says the massive challenges facing the US right now are all tied to a “savagely broken food system”.

And last week, his most recent challenge to that system gained new momentum, when a coalition of 300 farm, food, and environmental advocacy organizations sent a letter to Congress urging legislators to pass a bill that would eventually eliminate the country’s largest concentrated animal feeding operations (Cafos).

Speaking exclusively to the Guardian, Booker, a New Jersey senator who ran for the democratic presidential nomination earlier this year, says: “Nobody seems to be calling out how multinational, vertically integrated industrial agricultural companies are threatening American wellbeing, and I just think that the more people learn about these practices, the more shocked they are.

“I don’t think most Americans realize that the way we raise animals is such a betrayal of the heritage of our grandparents. I don’t think they realize that … these big companies like Smithfield and Cargill and others have our American farmers now living like sharecroppers in constant debt, forced to follow their rules. I’ve watched the suffering in North Carolina of minority communities who live around Cafos and can no longer breathe their air … and I’ve seen workers in the meatpacking plants and how dangerous those plants are.

“Everybody is losing in this system – except for the massive corporations that have taken over the American food system.” 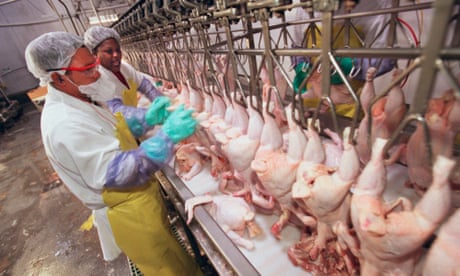 Revealed: Covid-19 outbreaks at meat-processing plants in US being kept quiet

Booker was elected to the Senate in 2013, after serving as mayor of Newark, New Jersey, from 2006 to 2013. During his time in the Senate he has focused his efforts on progressive issues like criminal justice reform, reducing economic inequality and increasing access to healthcare.

More recently, the food system and the way it shapes inequalities in the US has emerged as one of his defining interests. As mayor of Newark, where more than 50% of the city’s residents are people of color, Booker observed a high rate of poverty and food insecurity. “I learned early in my time as mayor, when I was focused on things like criminal justice reform and economic justice, that all of these issues and injustices were intersectional, and you have to deal with them with a holistic view,” he says.

“Kids who walk into bodegas can buy a Twinkie product cheaper than they can buy an apple because 90% of our agriculture subsidies go to four major monocrops,” he says. Workers exposed to dangers in meatpacking plants and to poor working conditions and pesticide exposures on farms are also disproportionately people of color, concerns recently amplified by the Black Lives Matter movement.

“What’s motivating me is that I think we need to really sound the alarm in America,” he says. “There are so many crises [that relate] to public health, from global warming to economic justice to humane treatment of animals. What should not be surprising is that a senator is taking this on. What should be more surprising is that we as a country have not seen this broken food system, especially after a Covid crisis, which has so exposed the fragility of the American food system. The real question is why isn’t Congress as a whole moving to address this massive threat to public health?” 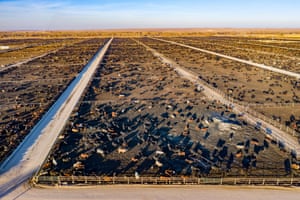 The issue of the US food system has picked up steam amid the Covid-19 pandemic, which shed light on the potential of Cafos to spread disease and contribute to antibiotic resistance, as well as the fragility of the US’s heavily consolidated food chain. There have been large coronavirus outbreaks at plants: hundreds of workers have died, thousands have been ill, and farmers have been forced to euthanize and dispose of millions of animals.

Booker, unlike most politicians, is willing to call out the behaviour of powerful meatpacking companies and introduce legislation to directly disrupt and regulate their businesses. In June, Booker and Senator Elizabeth Warren launched an investigation into meatpacking companies’ actions during the pandemic, looking at the coronavirus outbreaks and the companies’ claims that keeping plants running was necessary to feed the country, at the same time as a record amount of meat was being exported to China and other countries. In July, Booker introduced a bill that would prevent the US Department of Agriculture from allowing plants to speed up their lines, but it has so far not moved forward. 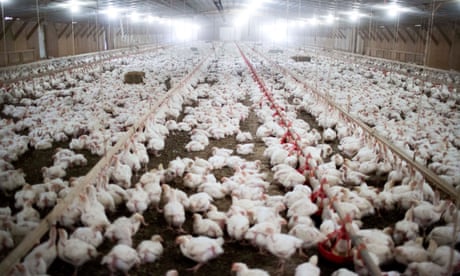 US chickens 'literally sitting in each other's waste' says RSPCA

But the Farm System Reform Act, which would place a moratorium on new or expanding large Cafos, is his most radical piece of legislation, aimed at phasing out large Cafos altogether by 2040, and pledging support and legislative protection for farmers transitioning away from the system. It has now been introduced in the House, and has also gained support from Warren and Bernie Sanders.

“The Farm System Reform Act is the bold approach we need to bring dangerous factory farming under control now, and begin the necessary transformation to a safe and equitable future for food consumers and workers alike,” Food and Water Watch executive director Wenonah Hauter said in a press release announcing the letter sent to Congress.

So far most of the enthusiasm is coming from progressive politicians: presidential nominee Joe Biden’s plans on climate and rural America do not mention Cafos at all. 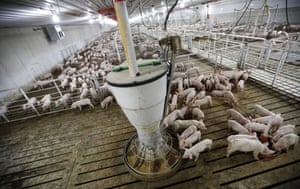 ‘I’ve watched the suffering of communities who live around Cafos and can no longer breathe their air’, says Booker. Photograph: Charlie Neibergall/AP

But, in Booker’s mind, it’s not a matter of if the largest factory farms will someday be a thing of the past, it’s when. “We are on the right side of history,” he says, comparing the fight for a better food system to other successful social justice movements like marriage equality and criminal justice reform.

“This one is going to take awareness, because I just don’t think when most Americans sit down and have their dinner they realize that the food that they’re eating … is part of a system that’s hurting their environment, their health, the wellbeing of workers, and the wellbeing of animals. I just have a deep, abiding faith in the goodness and the decency of Americans, and that’s why I know when it comes to an issue of justice, that’s the way we’ll move as a society. The big question I have is how quickly can we get there?”

Sign up for the Animals farmed monthly update to get a roundup of the best farming and food stories across the world and keep up with our investigations. You can send us your stories and thoughts at animalsfarmed@theguardian.com