Animals farmed is supported by 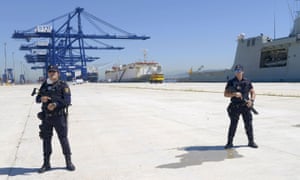 When the Neameh sailed out of Colombia on 4 May, it should have been a routine shipment: just over 4,000 cattle, on their way to Egypt, an important hub for the global trade in live animal exports.

But accusations of cocaine smuggling and a police raid of the ship lengthened the journey.

As the Neameh sailed into the mouth of the Mediterranean in the early hours of 21 May, it was apprehended close to Gibraltar by Spanish customs agents and the Spanish navy on suspicion of cocaine trafficking.

Spain’s health ministry did not allow any of the cattle to disembark, or the offloading any carcasses, while customs and police searching the ship were unable to use sniffer dogs because of the stench. The Spanish news agency Efe said agents required breathing apparatus to search the bowels of the ship.

Conditions on the ship, which sails under a Panamanian flag, were unbearable according to multiple local news reports, with the animals crowded on board. “The strong stench was noticeable tens of metres from the ship,” said the Algeciras-based news outlet Europa Sur. “Many of the animals lay dead on the ground for several days among urine, faeces and feed, decomposing. Many others were in agonising pain, with no remedy.”

“It was hell,” one witness told Europa Sur, describing a scene of overcrowding and animals “barely able to stand on their feet”. The Spanish interior ministry referred requests for comment to the police, who did not respond to questions about the operation or its outcome.

The search was eventually called off and, without public explanation, the ship continued its journey the next morning.  By the time the vessel docked in Damietta on Egypt’s northern coast, according to the ship’s records, 34 animals had died, although their bodies were not on the boat.

Officials from the Egyptian agriculture ministry who inspected the vessel on arrival in Damietta on 29 May described the animals as being in a “miserable condition”. Photographs show cattle packed into the ship in dirty and crowded conditions, prompting concerns for their health and wellbeing.

Hijazi & Ghosheh, the trading company that operates a fleet of ships – including the Neameh – transporting livestock, tell a different story to the Spanish press. “When the captain came to the bridge [the police] immediately hit him – this is not a way to investigate a suspect,” said Ayat Shawkat, fleet manager for the Neameh and its crew. “They hit him with a machine gun. Everyone has a right to investigate, but not to harm people. This was barbaric.”

Some of the 42 crew members were forcibly sequestered in one part of the ship, he said, while others were taken to a nearby police station. While 20 were normally tasked with taking care of the livestock, just three or four labourers were permitted to care for the animals while the search took place.

The ones chosen were apparently unfamiliar with what needed to be done to keep them safe and healthy. “They couldn’t conduct proper feeding and watering,” he said. “The cattle lay down, but normal practice is to get them up and then put out the feed so that no cattle jump on top of one another. When they do this with so few people these things happen. It’s a big issue.” The result, he claimed, was poor conditions on board. 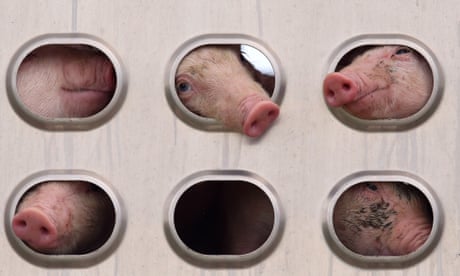 Shawkat rejected any suggestions that lack of care for the animals prior to their unexpected arrival in Spain was responsible for the distressing conditions witnessed in Algeciras. Instead he blamed the unplanned stop for the problems. “During the search they spoiled the feed,” he said. “There was a limited amount for the destination. But with these delays … it’s hell what happened to the ship, it was in really bad shape. For animal welfare, it’s a big violation.”

He also dismissed any possibility that the Neameh was smuggling cocaine, or that the poor conditions on board could have made it easier to hide a cache of drugs. “I don’t think so,” he said. “For one reason, there was no one allowed to go on board [in Colombia] due to Covid-19, and no one allowed to leave the ship. It’s out of the question.”

Multiple Colombian government agencies did not respond to requests for comment about the Neameh smuggling cocaine.

The tale raises questions about links between the global narcotics trade and the animal industry. In Colombia in the 80s, for example, Pablo Escobar’s cartel was reported to have strong links with the Colombian Cattlemen’s Association. More recently, a 2014 statement by the head of the Central American Federation of Meat Producers detailed cocaine smuggling from Nicaragua to Mexico with the drug hidden in the intestines of cattle. 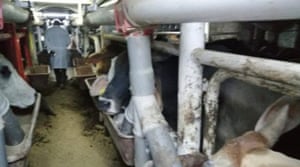 But it also raises questions about the effectiveness of the patchy regulations in place for the live animal export trade. Why, critically, was the ship allowed to leave Spain when conditions potentially breached EU regulations which say that animals being transported in or out of the EU must comply with animal welfare standards?

“The Neameh only obtained attention by authorities and the media because of the suspicion of drug trafficking. However, vessels like Neameh transport animals across the globe every day and mostly remain unnoticed by the public,” said Sophie Greger of Animals’ Angels, which works to protect animals from live transport.

Throwing dead cattle overboard from freighters is illegal on the Mediterranean, where the practice sometimes results in carcasses washing ashore in coastal towns or on islands like Menorca. Shawkat did not respond to additional questions about what happened to the carcasses, or why the 34 dead cattle were not on board the ship in Damietta.