Are slaughterhouses turning into coronavirus factories? 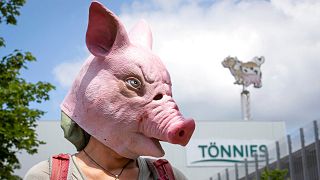 For weeks now, meatpacking plants around the world have been making headlines as hotspots of coronavirus infections.

Germany is currently trying to contain one of its biggest clusters in North Rhine-Westphalia, stemming from hundreds of employees who caught the virus at one factory in Gütersloh.

Experts say meat processing plants are ripe for the virus to spread, as they're often cold, damp, and keep employees in close contact. But much of the transmission of the virus may occur away from work: where employees live and share meals.

"It's very important to realise that workers in these plants – and this is unpopular work – are often migrant workers, foreign workers who will live in dormitories. And they live and travel very closely together," Professor James Wood, the head of Cambridge University's Veterinary School, told Euronews.

"So transmission, where clusters occur, maybe occurring both in the home environment from travelling to work, as well as actually in the workplace itself."

German authorities have reinstated lockdown restrictions on Gütersloh and parts of a neighbouring county after more than 1,550 people tested positive for coronavirus at the Tönnies slaughterhouse.

The family-owned company has come under fire for suggesting that its workforce, made up mostly of immigrants from Eastern Europe, brought the virus in after borders reopened and they could travel home to visit their families.

Union officials, meanwhile say the outbreak is due to the cramped working and living conditions that employees face under loosely regulated sub-contractors.

The use of subcontractors, which is common in the German meat industry and which the government now wants to ban, often results in migrant workers living in cramped communal housing and being transported to abattoirs in minibuses, putting them at greater risk of infection.

Dr Ute Rexroth, a senior official involved in Germany's pandemic response, said this week that poverty seems to play a significant role in who gets infected, calling it "the root of the problem."

The head of Germany's disease control centre said on Tuesday that the exact reasons why slaughterhouses in Germany, the United States and other countries have become hubs for coronavirus infection are still being investigated.

"It's certainly the case that if you live in cramped conditions and small rooms, then that's a situation where the virus can spread more easily," said Lothar Wieler, who heads the government's Robert Koch Institute.

He added that the low temperatures in parts of the plant, intended to keep the meat cool, could also play a role. "Another factor, which we don't think is small, is the development of aerosols," he said, referring to tiny droplets of liquid that can linger in the air and potentially contain viruses.

Slaughter lines are cold, damp and rely heavily on ventilation to stay that way. They’re confined, fast-moving, noisy environments, where workers often have to shout to understand each other.

"All of these things can promote transmission. And in many other parts of the whole process, you may have workers working closely, next to each other for long periods in long shifts," said Wood.

But he noted that these risks could be mitigated through the use of protective personal equipment such as masks and gloves, which is standard practice in the industry to prevent the contamination of food products.

"I think it's very, very important to think that it's more than just the work environment – it's how workers are living and travelling to work as well that may be underlying some of these really big outbreaks," Wood said.

You can watch excerpts of the interview in the video player above.