The Australian government has signalled it may appeal against the federal court ruling that Labor’s suspension of live cattle export in 2011 was invalid, because the Coalition fears it could have broader ramifications when ministers make decisions.

The Coalition has long criticised the former Gillard government’s decision to suspend the export trade over animal welfare concerns, but the attorney general, Christian Porter, told his colleagues on Tuesday he was concerned about the wider impact.

Based on signals from the Coalition, it is possible the government will seek to compensate the affected graziers while appealing against aspects of the court decision.

The federal court ruled last week that the blanket suspension of live cattle export in 2011 was invalid, “capricious and unreasonable”, and amounted to “misfeasance in public office”. 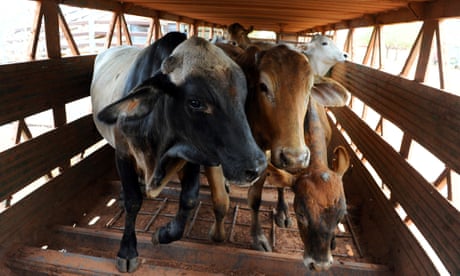 The then agriculture minister, senator Joe Ludwig, signed a six-month suspension of the live cattle trade to Indonesia on 7 June 2011, in response to an ABC Four Corners report that showed shocking footage of Australian cattle being slaughtered inhumanely in Indonesian abattoirs.

It is understood several Coalition members raised the issue of the recent court decision on live cattle export trade at a joint party room meeting on Tuesday and asked whether the government was intending to appeal against the decision.

Scott Morrison replied that the government was working with the live animal export sector to deal with “the injustices” suffered by that industry, but the prime minister added that the judgment raised “real issues” more broadly.

At the meeting Porter did not commit one way or the other regarding an appeal, but argued the tort of misfeasance was applied in a way that had not been seen before.

Porter told the meeting he believed it was possible to do justice to those affected by the live-export shutdown decision while ensuring there was no impact on democratic decision-making by duly elected ministers.

Damages are due to be decided at a hearing later this month. Porter said a 21-day deadline for a decision on an appeal did not begin until after the final hearing.

In 2014, the Northern Territory-based Brett Cattle Co led a class action against Ludwig and the department, claiming it had lost the opportunity to sell about 2,776 head of cattle during the ban and suffered losses totalling about $2.5m.

To date 30 parties have joined the class action, calling for up to $600m in compensation.

The agriculture minister, David Littleproud, said last week the government understood “the anguish of those plaintiffs” but the decision had “implications that need to be worked through”.

“We intend to address it as quickly as we can and as fairly as we can.”

With those in power failing us …

… at this historic moment, we demand better. From the covid pandemic and police brutality to the marginalisation of minority communities around the world, leadership is broken. Devoid of the humility and inclusivity we so desperately need, leaders are gambling with public health, safety and the future of younger generations. Lacking in honesty and transparency, poor at crisis management, and given to narcissism, our leaders unapologetically prioritise serving themselves over the people they were elected to serve. We have to make them raise their game.

That’s what the Guardian’s here for. As an open, independent news organisation we investigate, interrogate and expose the incompetence and indifference of those in power, without fear. Our journalism is free from political and commercial bias – this makes us different. We can give a voice to the oppressed and neglected, and stand in solidarity with those who are calling for a fairer future. With your help we can bring about improvement.

You’ve read 9 articles in the last six months. And you’re not alone; millions are flocking to the Guardian for quality news every day. We believe everyone deserves access to information that is fact-checked, and analysis that has authority and integrity. That’s why, unlike many others, we made a choice: to keep Guardian reporting open for all, regardless of where they live or what they can afford to pay.

We’re determined to provide journalism that helps each of us better understand the world, and take actions that challenge, unite, and inspire change – in times of crisis and beyond. Our work would not be possible without our readers, who now support our work from 180 countries around the world. Your support keeps us independent, open, and means we can maintain our high quality reporting – investigating, disentangling and interrogating.

Every reader contribution, however big or small, is so valuable for our future. Support the Guardian from as little as €1 – and it only takes a minute. Thank you.