The Netherlands is one of 24 countries where mink farming is still legal. In a historic move, the Dutch parliament has voted to permanently close the mink fur farms shut down by COVID-19. 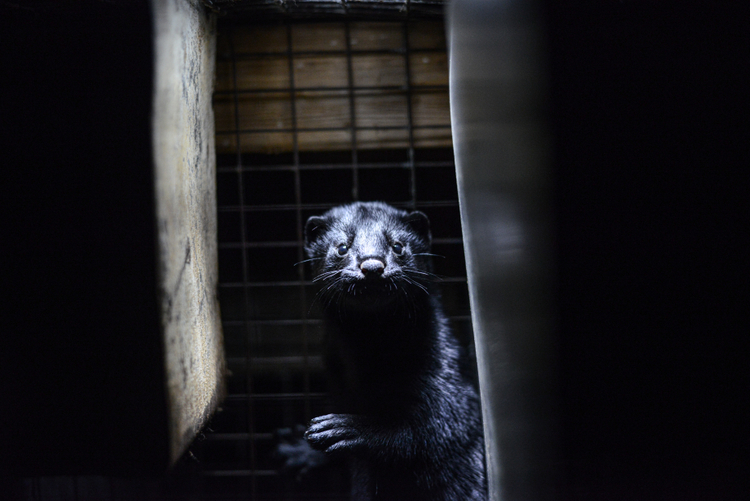 Today the Dutch parliament voted to permanently close the mink fur farms that were shut down following outbreaks of COVID-19 among workers and animals and to close down remaining farms this year. Animal welfare campaigners are celebrating the outcome of the vote after pushing for the early closure of the mink fur industry ahead of a nationwide ban due to come into effect in 2024.

“Keeping thousands of mink in crowded, filthy and stressful conditions is a recipe for extreme animal suffering and biological disasters,’ says Brigit Oele, Program Manager at Fur Free Alliance. “We welcome today’s vote by Dutch MPs to shut down mink fur farms in the Netherlands and prioritize welfare concerns over the industry’s interests.”

Several motions regarding the mink fur sector were put to a vote today. MPs passed the motion not to allow restocking of the 17 farms that have already culled their mink due to coronavirus, meaning that they will not reopen. They also voted to ban the commercial breeding of animals known to be susceptible to coronavirus to prevent reservoirs of the virus from forming, effectively requiring the rapid closure of mink farms. Another motion that passed asked the government to compensate mink farmers to bring their operations to a close by the end of the year. Dr. Jo Swabe, Senior Director of Public Affairs at Humane Society International, cautions that today’s votes are only an instruction to the government, which must decide whether to take the actions approved by parliament.

Mink fur farming has been slowly phasing out in the Netherlands since a vote in 2013 to close all farms by the beginning of 2024. The spread of COVID-19 among mink across multiple farms since April resulted in at least two workers catching the virus from the animals and triggered calls for the government to rapidly shut down the industry. “Waiting until 2024 for the mink ban to take effect would have been unjustifiable and irresponsible,” says Sandra Schoenmakers, director of Dutch anti-fur organizations Bont voor Dieren. The latest available figures show that nearly 600,000 mink across 13 farms had been killed by gassing with carbon monoxide on the orders of the Dutch government, but many more are likely to be killed in the coming weeks.

Factory farms and slaughterhouses across the world have become coronavirus hotbeds due to cramped and unsafe working conditions, endangering the lives of workers who have been given inadequate protection by the companies that employ them. While transmission between workers on the Dutch mink farms has not reached the levels seen on agricultural farms, it presents the first case in which humans passed the virus to the farmed animals who then transmitted it back to humans.

“The intensive breeding of animals on fur farms is an incredibly cruel practice that not only causes immense suffering to animals, but can also serve as a reservoir for coronaviruses,” says Swabe. “While we are disappointed by the suggestion that taxpayers’ hard-earned money should be used as compensation to fur farmers who have kept this cruel industry alive in the face of massive public and political opposition, this vote calls on the government to act swiftly to end this inhumane practice before the existing 2024 deadline. That is worth a celebration. The Dutch government now has to take action to honor the Parliament’s wishes.”

The Netherlands is one of the world’s top producers of mink fur, with 4.5 million mink farmed in 2018, and one of 24 countries where mink farming is still legal. While Europe has a scheme called Welfur set up to monitor the welfare of animals farmed for their fur, campaigners believe that conditions on fur farms are still too cruel. A video (warning: distressing content) filmed by Bont voor Dieren three years ago inside a Dutch fur farm shows mink crammed together inside small dirty cages, where they scratch at the walls and attack each other. Repetitive stress behaviors found among caged mink are known as stereotypy, a form of mental psychosis.

Other major mink farming countries include Denmark, Poland, and China. While there is still a fairly strong market for fur globally, campaigns against it by the likes of PETA have had an impact, with increasing numbers of fashion designers committing to no longer use fur. “The Dutch Parliament has today said good riddance to an industry predicated on the out-dated idea that exploiting, depriving and killing animals for frivolous fur fashion is acceptable,” says Swabe. Campaigners hope the emergence of COVID-19 among fur farms will further diminish the industry.  “In light of the COVID-19 risk,” says Oele, “we call on all fur-producing countries to follow [the Netherlands] and end this barbaric practice for the sake of animal and public health.”

Claire is a freelance writer focused on the environment and animal rights and welfare.