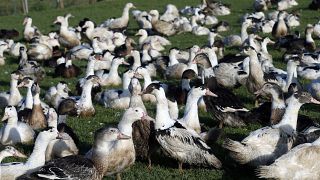 France's government has ordered farmers to cull a total of 2.5 million animals after a number of outbreaks of bird flu.

More than one million additional birds will now need to be slaughtered in the southwest of the country, the French Agricultural Ministry said on Thursday.

All ducks, chickens, and turkeys on farms in 226 different towns will have to be culled within the next three weeks.

Around 1.2 million birds have already been killed since late November due to infection or as a precautionary measure after a rapid spread of the disease.

Farmers in the region — where foie gras is widely produced — are compensated each time they are told to cull animals.

"We are obviously in favour of this sanitary vacuum," said Hervé Dupouy, a duck farmer and union leader in Landes.

"Once the sanitary vacuum is done, we clean, disinfect and put the animals back in place," he told AFP.

According to ministry figures, France has so far recorded 216 outbreaks of bird flu this winter. Last year, French farmers were forced to cull 3.5 million birds — mainly ducks — due to the virus.

“We’re desperate, farmers’ morale is poor," Dupouy said. "How can we look to the future beyond the situation we’re experiencing, with dead animals on our farms?”

'Most serious damage to wildlife', at least 5,200 cranes killed by bird flu in Israel

At least 200,000 ducks culled in France amid bird flu outbreak