The Greek government has decided to legally ban overweight tourists from receiving rides from donkeys.

Throughout Greece and its islands, donkeys are used as a popular means of transportation among tourists. Visitors pay to climb onto a donkey’s back to travel up and down Greece’s iconic cobblestone steps that are frequently marveled in major tourists hotspots, such as Santorini.

But now this popular activity will be restricted to one’s size. According to the New York Daily Post, Greece’s Ministry of Rural Development and Food published new regulations for donkey rides after receiving complaints regarding the well-being of the animals.

State donkeys which give rides to tourists will be barred from carrying loads heavier than 220 pounds, which roughly equals one-fifth of their weight.

A government statement regarding the new law reads:

“The owners of working equidae [donkeys] should ensure that the animals’ level of health is high. Under no circumstances should be used animals unfit for work i.e., ill animal, injured, animals in an advanced pregnancy as well as animals with poor maintenance of hooves.”

The law was created after animal rights groups complained about spinal injuries and open wounds that the donkeys suffered from due to carrying heavier tourists. 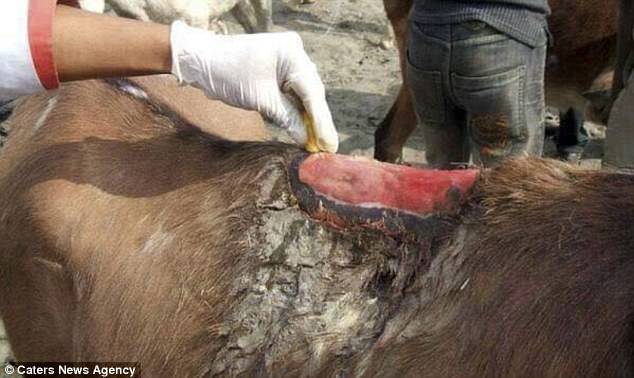 Caters News AgencyWound on a donkey from an ill-fitting saddle.

“The obese and overweight tourists, combined with the lack of shade and water as well as the sheer heat and 568 cobbled steps, is what is causing such a problem,” a spokesperson for the Help the Santorini Donkeys group said in a statement.

Animal rights advocacy groups such as the aforementioned one publicized the maltreatment of these Greek donkeys and garnered tremendous media attention, which in turn prompted the influx of complaints made to Greek government officials.

Elisavet Chatzi, a volunteer that participated in peaceful protests in Santorini over the issue, is pleased with this policy change. “It’s a very big step, I think all our hard work has paid off,” she said.

The impact that this new law has on Santorini appears to have been immediate. “The next day after the bulletin was released, I was told a tourist had been carried up the hill by three different donkeys, so as not to exhaust them,” said Chatzi.

However, there is no telling how this new law will be enforced in Santorini and in other parts of Greece. “The situation in Santorini has been going on for many years and it cannot be resolved in one day,” said Chatzi.

Other advocacy groups don’t believe this new law is enough.

Maria Skourta, leader of the Athens branch of Direct Action Everywhere — the same group which was legally restrained from protesting outside a Whole Foods — says that although the new law definitely has brought the donkey mistreatment issue to light, the donkeys are still forced to carry cement, appliances, and all sorts of heavyweights even with the regulations in place.

“Our goal is not to improve the lives of slaves, it is to free them entirely,” said Skourta.