Iceland is under pressure to ban the production of a hormone extracted from pregnant horses, a practice that has been described as “cruel” and “animal abuse”.

The hormone is used by farmers across the UK and Europe to increase reproduction in pigs, cows and other female farm animals.

Pregnant Mare Serum Gonadotropin (PMSG) is extracted from pregnant horses in Iceland during the summer at “blood farms”, before being converted into powder and shipped around the world.

Animal welfare campaigners in Iceland visiting farms with the Guardian showed broken restraint boxes and enclosures covered in bite marks, which they claimed was a sign of anxious horses.

Undercover footage from farms, taken by animal welfare campaigners, also appeared to show distressed horses being hit and struggling in restraint boxes before blood was drawn using a large cannula inserted in their jugular vein.

The European Commission said it was “seriously concerned” about the treatment of horses farmed for blood, while the European parliament has called for imports of the hormone to be banned.

The complaint accused Iceland of breaching EEA law on the protection of animals used for scientific purposes and said Icelandic authorities should ban blood collection. 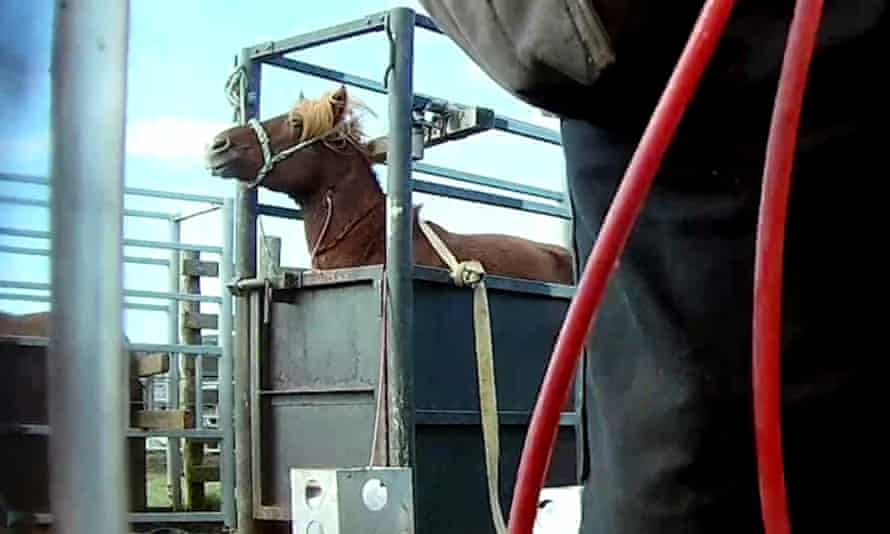 A mare is held in a restraint box while blood is extracted using a cannula inserted in the animal’s jugular vein. Photograph: Animal Welfare Foundation

Support for a ban is also growing within Iceland. The opposition People’s party has put a bill through parliament calling for a ban. The bill, which is awaiting a vote, is supported by groups including the Icelandic Tourism Association.

A working group, set up by Iceland’s Fisheries and Agriculture department is due to report its findings this summer.

Experts have also expressed concern about the amount of blood taken from horses. The pharmaceutical company Isteka, which owns or subcontracts farms, said five litres of blood are taken from pregnant mares every week for eight consecutive weeks – around four times the amount specified on international guidelines.

The Icelandic Food and Veterinary Authority (Mast), which granted Isteka a licence, said: “There is no indication that blood collection of five litres a week for up to eight weeks has a negative impact on the health and welfare of the mares or their foals.”

Ingunn Reynisdóttir, a veterinarian who lives in north Iceland and has worked with horses all her life, disagreed. “It’s too much [blood] and if you take too much they are trembling and have difficulty walking,” she said.

Mette Uldahl, vice-president of the Federation of Veterinarians of Europe (FVE), said of the practice: “It’s animal abuse and it’s cruelty. You shouldn’t use untrained horses because they get too scared.”

Blood farms are believed to have been operating in Iceland for about 40 years, but Icelanders who spoke to the Guardian said they had little knowledge of them until last November, when the Animal Welfare Foundation undercover video was shown on television. A survey in December found most of the population was opposed to the blood farms.

“I didn’t have a clue we were doing this here and I was shocked when I saw it,” said Bjarnheiður Hallsdóttir, chair of the Icelandic Travel Industry Association. “It [is] awful.”

“I would like people to know that Iceland is actually stabbing semi-wild pregnant mares, taking their blood in extreme volumes and frequency, just to … make pigs have more pigs,” said Rósa Líf Darradóttir, a medical doctor and horse owner in Reykjavik.

In Germany, 6.4m single doses of PMSG – the equivalent of about 32,000 litres of blood – were given to sows between 2016 and 2019, according to the federal ministry of food and agriculture.

PMSG can be obtained legally in the UK from a registered vet, with products available including vaginal sponges for sheep, which induce early lambing, with advertised benefits such as producing lambs “at the optimum time for autumn sales”.

“The EU cannot impose its animal welfare standards in third countries and our trade policy has to respect the rules of the World Trade Organization. For this reason, the commission continues to address the importance of improving the welfare conditions of horses involved in the production of PMSG at multilateral level in the framework of the World Organisation for Animal Health (OIE).”