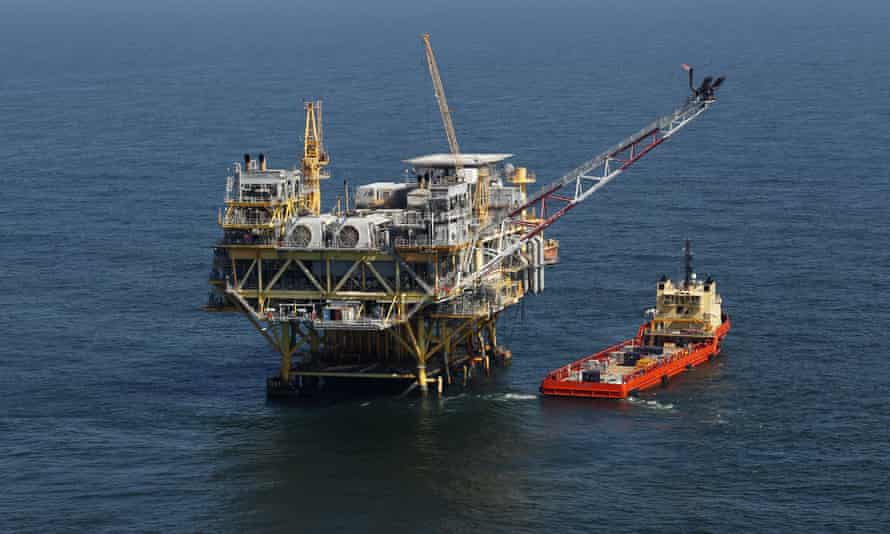 The Biden administration announced it would resume opening up tens of millions of acres to fossil fuel exploration after being sued by more than a dozen states. Photograph: Gerald Herbert/AP

Outrage and at least one lawsuit has followed the Joe Biden administration’s announcement this week that it would open tens of millions of acres in the Gulf of Mexico for oil and gas exploration in an effort to comply with a court order.

Earthjustice, a non-profit public interest organization, has filed a lawsuit on behalf of four environmental groups in Washington DC federal court challenging the move. They alleged that the environmental analysis behind the auction is flawed and violated federal law.

Brettny Hardy, attorney for Earthjustice, described the decision as the Biden administration folding to the oil industry, despite the worsening climate emergency.

“Our planet cannot handle more stress from oil and gas production and yet the Biden administration is plowing ahead with a lease sale that will have impacts for decades into the future,” she said in a statement.

The lawsuit was filed on behalf of Healthy Gulf, Sierra Club, Friends of the Earth and the Center for Biological Diversity.

Other conservationists and environmental groups have highlighted the particularly distressing nature of this announcement coming in the midst of Louisiana and neighboring states getting pummeled by Hurricane Ida, and the fact that it directly conflicts with Biden’s campaign vow to put an end to new federal oil and gas leasing.

In a tweet on Wednesday, the Ocean Conservancy, a non-profit environmental group, posed the question, “How does this align w/ Biden administration commitment to take ‘bold steps’ to combat the #ClimateCrisis?” while the Center for Biological Diversity, a non-profit conservation organization, launched a petition “urging Biden to keep his climate promise on public lands and oceans”.

The announcement by the Biden administration came after a months-long legal seesaw initially sparked by the president signing an executive order in January pausing new oil and gas leasing on federal lands and waters, pending an analysis on their impact.

In response, more than a dozen states sued the Biden administration. In June, a federal judge in Louisiana ordered the government to resume auctions, stating that the law requires it to offer acreage to the oil and gas industry, according to Reuters.

In the Record of Decision, a sale document published online, the US interior department explained that the majority of a 92m-acre area in the Gulf of Mexico would be available for lease. The result of such a sale could be production of as much as 1.1bn barrels of oil and 4.4tn cubic feet of natural gas.

The document referenced the Intergovernmental Panel on Climate Change’s report produced by hundreds of the world’s top scientists and released earlier this month, which stated that climate change is caused by human activities and that it is affecting every part of the planet already. But, the sale document said, the “report does not present sufficient cause to supplement” an environmental analysis conducted by the Trump administration of the lease sale.

It then added: “The report as well as additional analysis of climate change may be a significant consideration in the Department’s decisions regarding oil and gas leasing programs in the future.”

Kathleen Sgamma, president of the oil and gas industry group Western Energy Alliance, wrote in an email to Reuters that the Biden administration was continuing to “slow walk sales”. She also said the group was suing the interior department and looking to win a court order so that sales are held sooner than 2022.