When it comes to reproduction, one type of red algae gets by with a little help from its friends: small sea crustaceans that transport sex cells between male and female algae, like pollen-laden bees buzzing between flowers.

The discovery is the first known example of animal-driven “pollination” in algae, researchers report in the July 29 Science. Both the red algae and crustaceans belong to far more ancient groups than land plants do, raising the possibility that a form of pollination first evolved in the ocean, hundreds of millions earlier than originally thought.

Pollination typically describes the transfer of male sex cells — pollen — to a female flower, usually on land. Then in 2016, researchers discovered that various marine invertebrates “pollinate” seagrass flowers by feeding on and moving between the gelatinous pollen masses of seagrasses, which are descended from land plants. But nothing similar had yet been documented in algae.

Like other red algae, Gracilaria gracilis doesn’t have free-swimming male sex cells. Called spermatia, its sex cells were typically thought to be dispersed to female algae by the flow of water, much like how wind can spread pollen to fertilize certain land plants.

In the new study, Myriam Valero, a population geneticist at the Sorbonne University in Paris, and her colleagues were studying the genetics and mating of G. gracilis. After collecting samples of the seaweed and storing them in laboratory tanks, the team kept noticing hundreds of small, oblong crustaceans in the tanks. This discovery and the similarity of the algae’s spermatia to pollen led the team to wonder if the crustaceans help “pollinate” the algae.

Crustaceans called Idotea balthica move from a male red alga to a female one. A new study finds that the isopods spread the algae’s sex cells, aiding reproduction.

In the lab, the researchers placed male and female algae 15 centimeters apart in tanks with no water movement. Some tanks also included the centimeters-long Idotea balthica, a type of isopod crustacean, while others didn’t. When a successful fertilization occurs on the body of a female red algae, it creates a bubblelike structure called a cystocarp. By counting cystocarps, the team quantified how many spermatia were reaching and fertilizing the female algae. When isopods were present, fertilization success was about 20 times as high as in their absence.

The team also set up tanks with just female algae and isopods exposed to male algae earlier. Some of the female algae then bore cystocarps, offering more evidence that the crustaceans — relatives of land-living pill bugs — shuttle sex cells between algal stalks. The team further confirmed the isopods’ role when looking at the crustaceans under a high-powered microscope — like bumblebees dusted with pollen, the creatures had spermatia stuck all over their bodies.

The discovery hints that algae may have been among the very first organisms to reproduce using animals to spread sex cells. 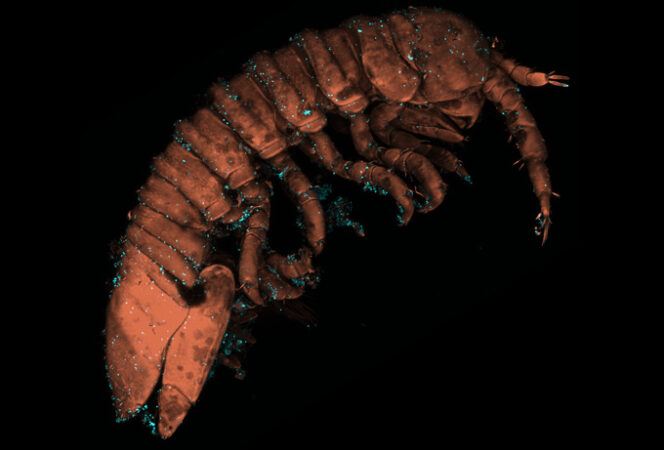 There was already evidence that animal-driven fertilization and pollination-like services evolved before land-based flower pollination. Scorpion flies may have pollinated conifers tens of millions of years before flowering plants evolved roughly 130 million years ago (SN: 11/5/09). Mosses, which are very similar to the first land plants that evolved about 300 million years before flowering plants, can be fertilized by tiny arthropods. Red algae are possibly more than 800 million years old, and complex animal life dates back more than half a billion years. That means animal-driven fertilization could have arisen even earlier than scientists realized.

“Such a system could extend to the Precambrian when red algae were present,” says Conrad Labandeira, a paleobiologist at the Smithsonian National Museum of Natural History in Washington, D.C. The pollinators wouldn’t have been isopods, he says, but very early arthropod groups.

Water movement may still help G. gracilis to spread its spermatia. But much of the algae’s fertilization occurs in rocky pools at low tide, when the water is calm, Valero says. “We think that the influence of the Idotea might be very important in those conditions.”

In return for their services, the isopods may gain shelter from the bushy algae and access to food stuck to their surface.

The team now wants to know if other red algae also use animal “pollinators” and if more than one animal partner is involved in algae reproduction.

Questions or comments on this article? E-mail us at feedback@sciencenews.org