Marineland charged with using dolphins, whales for entertainment without a licence

Marineland has been charged under the Criminal Code with using dolphins and whales to perform and entertain customers without Ontario government authorization, Niagara police say.

Police said they began an investigation into allegations captive cetaceans (marine mammals including whales, dolphins and porpoises) were being used at the theme park in Niagara Falls in October.

Mario Lagrotteria, the police service's Niagara Falls district commander, said there was video evidence throughout August. He also said it's the first time Niagara police have laid this charge.

"The information [investigators] received substantiated the allegation that this did happen within the month of August," he said.

Police previously confirmed their investigation was launched following a complaint received in October.

Marineland said in a statement to CBC News the park is following the law and "we look forward to the opportunity to defend ourselves in a court of law."

Miranda Desa, Canadian counsel for the U.S.-based non-profit Last Chance for Animals, said the group filed a complaint on Sept. 30 and a followup complaint in late October based on the use of dolphins and beluga whales for entertainment.

A member of Last Chance for Animals visited Marineland on Aug. 3 and Aug. 16, according to Desa. She said they recorded videos of dolphin and beluga whale shows, and sent them to police with their complaint.

Desa said the complaint focused on the use of belugas that were instructed to do tricks for food in front of park attendees.

The video, viewed by CBC News, appears to show dolphins doing flips and tricks for an audience with music playing in the background.

Under a section of the Criminal Code that was introduced in 2019, captive cetaceans cannot be used "for performance for entertainment purposes" unless the performance is authorized with a licence from the province.

After years of debate, the new law, part of Bill S-203, banned the captivity of cetaceans. It included a grandfather clause, however, for animals already in captivity.

Niagara police said the charge against Marineland was for the alleged use of captive cetacean for performance for entertainment purposes without authorization.

Marineland said in a statement the routine was an "educational presentation."

"Our animal presentation contains marine mammals undertaking behaviours they exhibit in ocean environments. These behaviours are combined with an educational script delivered by Marineland staff, providing a foundation in understanding of these important marine species.

"Marineland continues to be committed to our mission of research, education and conservation and will continue to provide world-class care for the animals who call Marineland home," the theme park said. 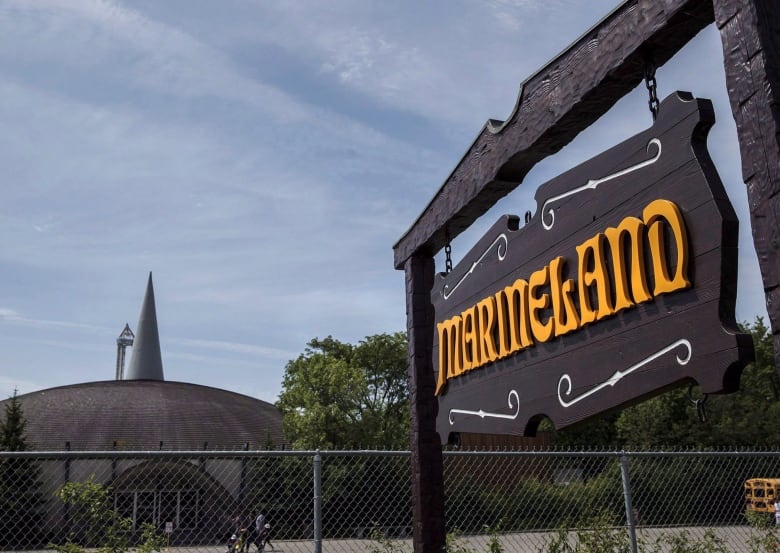 Marineland, shown in Niagara Falls, Ont., on Aug. 14, 2017, told CBC in an email Monday that it is following the law. (Tara Walton/The Canadian Press)

Lagrotteria said police found the evidence it gathered "met the threshold to lay the charge," but couldn't say much else as the case is before the courts.

He said any other concerns about the welfare of animals at the park should be directed to Provincial Animal Welfare Services.

Kendra Coulter, an associate professor at Brock University in St. Catharines, Ont., who's an analyst of labour involving animals, expressed skepticism over the idea such performances are educational.

"Any marine animals who are being kept in tiny tanks are not behaving normally," Coulter said in a phone interview.

"But the bigger question here is around the ethics of captivity and whether these large, complex, intellectually robust animals can in any way have healthy and positive lives in such tiny tanks and conditions ... the consensus is increasingly no."

There's a shift toward creating ocean-based sanctuaries and other alternatives, said Coulter.

Camille Labchuk, a lawyer and executive director of Animal Justice, said Marineland is one of the only theme parks in Canada that still has whales and dolphins, let alone uses them in performances.

"It is gratifying to see Niagara police take this matter seriously because the law is only as good as its enforcement," she said.

Representatives for Marineland are set to appear in court in St. Catharines on Feb. 14.

Under the section of the Criminal Code related to the Marineland case, anyone convicted of the offence is liable to a fine not exceeding $200,000.

Marineland has been under more scrutiny recently, with Animal Welfare Services and non-profit Animal Justice raising its own concerns.

With files from Sebastian Leck