Norway’s Slaughtered Whales Are Being Fed To Dogs

With domestic demand dwindling, whalers in Norway are selling the meat as dog food or dumping it into the ocean. 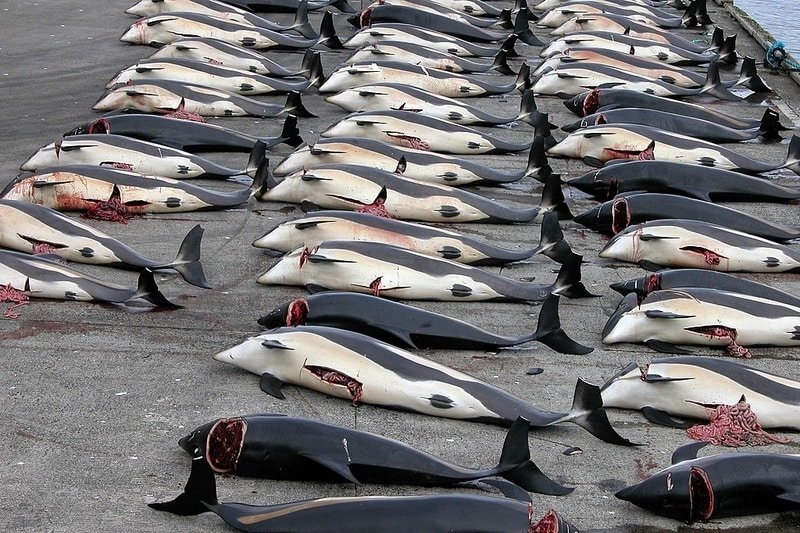 New documents have revealed that whalers in Norway have been selling whale meat as dog food, amid dwindling public appetite for the controversial product.

The shipment was reportedly approved by The Norwegian Environment Agency and was sent by Nor Lines, despite being a subsidiary of the Icelandic company Samskip, which pledged to stop transporting whale meat in 2013.

“Norway’s whaling titans and government leaders continue to perpetuate the false narrative that domestic demand for whale products is increasing,” said Susan Millward of the Animal Welfare Institute (AWI). “In reality, the very whales that help keep the ocean healthy and fight climate change are being fed to the dogs.”

Norwegian whalers have also admitted that dumping unused whale parts, such as meat, blubber, and bone, in the sea is common practice, according to AWI.

“How can we value the lives of these gentle giants so cheaply when they play such a massive role in mitigating climate breakdown?” said Vanessa Williams-Grey, policy manager at WDC, Whale and Dolphin Conservation. “We need more whales, not fewer—killing whales is not just cruel, it is stupid!”

Another whaling company, Myklebust Hvalprodukter, sells both whale oil and raw whale meat for dogs on its website.

Minke whale meat has also been sold to Norwegian fur farms, to feed the animals being held there. In 2014, the meat equivalent of 75 minke whales was delivered to Rogaland Pelsdyrfôrlaget, the largest manufacturer of animal feed for the Norwegian fur industry.

AWI noted that these developments are not surprising given the rapidly declining customer demand for whale meat in Norway.

Only 2 percent of Norwegians eat whale meat often, down from 4 percent in 2019, according to a recent poll commissioned by AWI, WDC, and NOAH, which included 1,037 Norwegians, between the age of 18 to 87.

“For an industry that has been struggling for years to build a domestic market for whale meat, these poll results are likely to be a painful blow,” said Susan Millward, director of AWI’s marine animal program. “Despite millions of kroner spent on marketing programs over the past two decades—bankrolled, in part, by the Norwegian government—Norwegians are clearly not interested in eating whale meat.”

Even with experienced whalers, the time it takes for a harpooned whale to die (TTD) can be as long as 15 minutes. An internal report to Norway’s Directorate of Fisheries found that 18 percent of whales in the 2012 hunting season were not instantaneously killed and that the median TTD was six minutes.

The poll revealed that Norwegian citizens have serious concerns surrounding this. Nearly two-thirds of respondents agreed that it is unacceptable that almost 1 in 5 whales do not die instantly when shot by a harpoon.

The Norwegian hunts are particularly damaging to conservation efforts, as around 70 percent of the whales killed are female, many of whom are pregnant. This is due to the fact that female minke swim further north along the Norwegian coast, during their migration in the North Atlantic Ocean.

“For years, the Norwegian government has tried to make whaling profitable by giving subsidies for its promotion. The fact that minke whales are ending up as dog food shows the failure of this strategy and the absurdity of the situation,” said Dr. Siri Martinsen, veterinarian at NOAH.

“Norwegians in general do not want to eat whale meat and I doubt that they would feel happy about whales being killed to feed dogs.”