A federal agency is offering up to $20,000 to anyone who can help identify the people who were involved in harassing a female bottlenose dolphin that died on a beach in Texas last month.

On 10 April, the Texas Marine Mammal Stranding Network received a call from a concerned beachgoer in Quintana, Texas, just an hour drive outside of Houston. The person had seen a dolphin beached on the shore and a crowd of beachgoers attempting to push the sick mammal back into the ocean, they told officials.

Rescuers reportedly advised the caller to tell the seemingly well-meaning beachgoers to stop forcing the animal out to sea, bring it back to the shoreline and to keep it shaded with water poured on top of it till professional rescuers could tend to the creature.

That, unfortunately, is not how that Sunday afternoon played out.

In a Facebook post shared just a couple days after the incident, the rescue group detailed how people had not only ignored the caller’s advice from the agency but had gone on to “attempt to swim and ride the sick animal”.

“This type of harassment causes undue stress to wild dolphins, is dangerous for the people who interest with them, and is illegal - punishable by fines and jail times if convicted,” the Texas Marine Mammal Stranding Network wrote in their post.

Dolphins are protected under the Marine Mammal Protection Act of 1972, a national policy that was enacted to prevent vulnerable marine populations from declining to a point they no longer existed in the ecosystem.

If convicted, people caught harassing, harming, killing or even feeding wild dolphins can face up to 1 year in jail and can be fined up to $100,000.

The rescue agency eventually made it down to the south Texas beach, but by the time they got to the beached dolphin, she was already dead.

A necropsy, a non-human autopsy, performed by the National Oceanic and Atmospheric Administration’s Office of Law Enforcement determined that the cause of death was drowning.

The federal agency circulated video stills that they obtained from the event and are asking anyone who can identify people involved to come forward, with tips being permitted to be left anonymously. 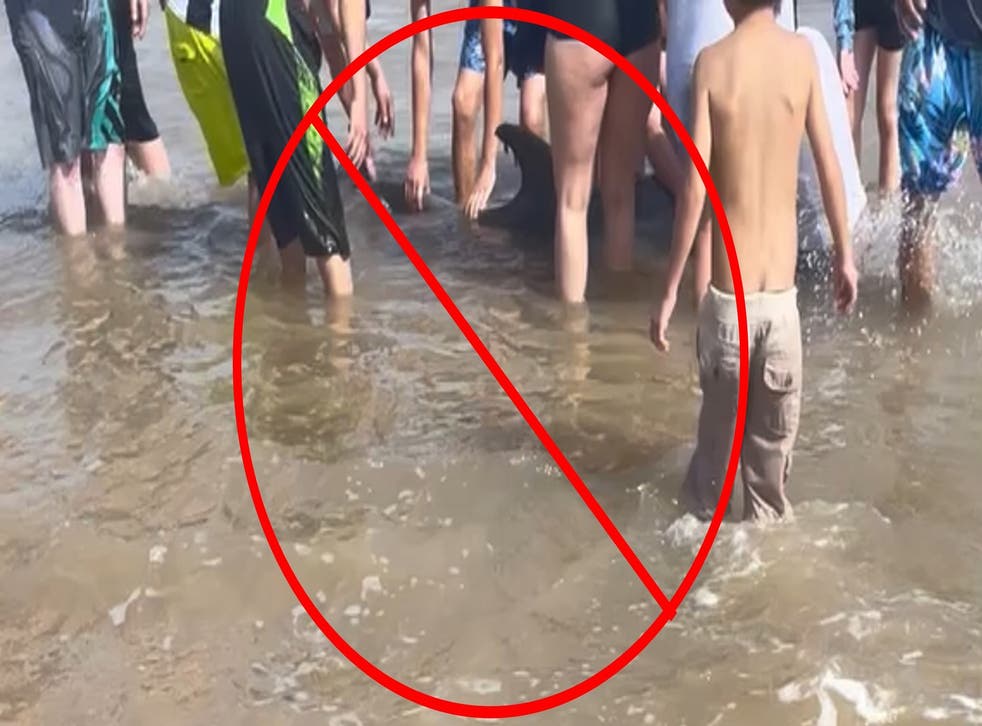 A stranded dolphin at a southern Texas beach is seen being touched and harassed by beachgoers. It is illegal to feed or harass wild marine mammals including dolphins, porpoises, whales, seals, sea lions, and manatees.

Last month’s harassment in Texas follows another fatal incident involving a dolphin that happened at a beach in Florida.

In that incident, a dolphin was found dead on Fort Myers Beach with a necropsy later determining that the animal was impaled in the head with a “spear-like object while alive”.

The office is similarly offering a reward of $20,000 to anyone providing information that leads to an arrest, conviction or civil penalty assessment