A cyberattack on the world’s largest meat producer has forced the shutdown of some slaughterhouses globally, and raised concerns about food security. 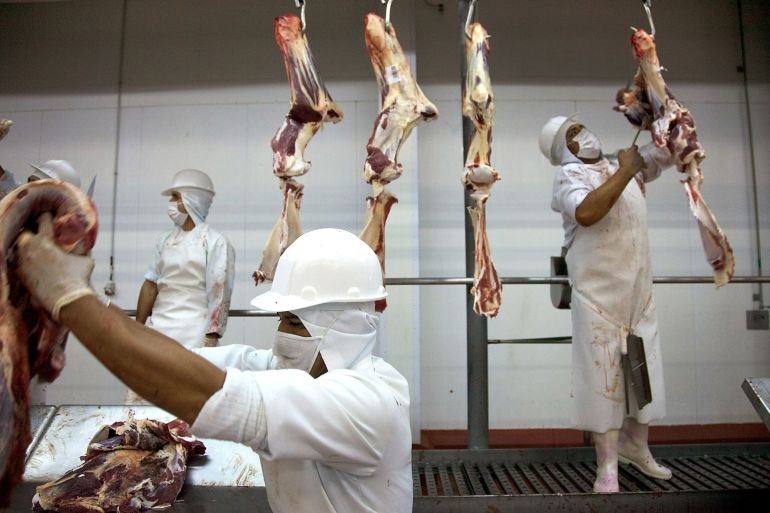 A cyberattack on JBS SA, the largest meat producer globally, forced the shutdown of some of world’s largest slaughterhouses, and there are signs that closures are spreading.

JBS’s five biggest beef plants in the U.S. — which altogether handle 22,500 cattle a day — halted processing following a weekend attack on the Brazilian company’s computer networks, according to JBS posts on Facebook, labor unions and employees. Those outages wiped out nearly a fifth of America’s production. Slaughter operations across Australia were also down, according to a trade group, and one of Canada’s largest beef plants was idled.

It’s unclear exactly how many plants globally have been affected by the ransomware attack as Sao Paulo-based JBS has yet to release those details. The prospect of more extensive shutdowns worldwide is already upending agricultural markets and raising concerns about food security as hackers increasingly target critical infrastructure. Livestock futures slumped while pork prices rose. 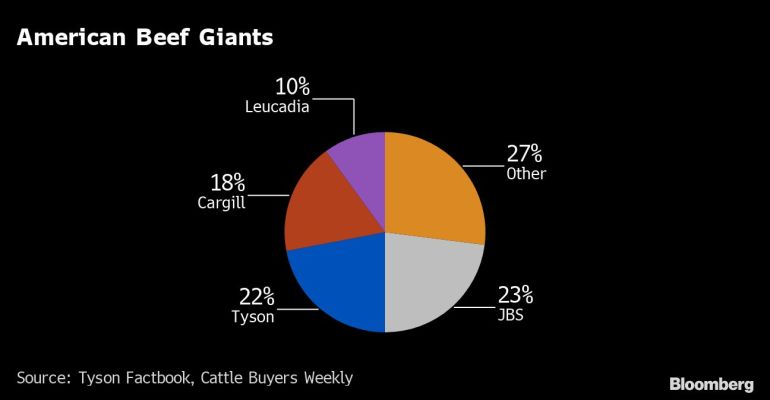 JBS suspended its North American and Australian computer systems on Sunday after an organized assault on some of its servers, the company said in a Monday statement. Without commenting on plant operations, JBS said the incident may delay certain transactions with customers and suppliers.

“Retailers and beef processors are coming from a long weekend and need to catch up with orders,” Steiner Consulting Group said in its Daily Livestock Report. “If they suddenly get a call saying that product may not deliver tomorrow or this week, it will create very significant challenges in keeping plants in operation and the retail case stocked up.”

The impact on meat prices at the grocery store may not be immediately apparent. Retailers don’t always like hiking prices on consumers and may try to resist, according to Michael Nepveux, an economist with the American Farm Bureau Federation.

“How long it goes on will impact to what level consumers start to see something at the grocery stores,” he said in a phone interview.

The White House offered assistance to JBS after the company notified the Biden administration on Sunday of a cyberattack from a criminal organization likely based in Russia, White House Deputy Press Secretary Karine Jean-Pierre told reporters Tuesday. Biden directed the administration to do whatever they can to mitigate the impact on the meat supply.

“Attacks like this one highlight the vulnerabilities in our nation’s food supply chain security, and they underscore the importance of diversifying the nation’s meat processing capacity,” said U.S. Senator John Thune of South Dakota, the Senate’s No. 2 ranking Republican leader.

Any substantial disruption in meat processing would further stoke mounting political concerns about the concentration of the meat industry and complaints of the four giant companies that control more than 80% of U.S. beef processing unfairly leverage their power over farmers and consumers.

JBS is the No. 1 beef producer in the U.S., accounting for 23% of the nation’s maximum capacity compared to rival Tyson Foods Inc.’s 22% share, according to an investor report by Tyson. JBS accounts for about a quarter of U.S. beef capacity and roughly a fifth of pork capacity.

JBS closed beef processing facilities in Utah, Texas, Wisconsin and Nebraska and canceled shifts at plants in Iowa and Colorado on Tuesday, according to union officials and employees. In Canada, an Alberta processing plant was expected to resume operations this afternoon after being idled since Monday, a union spokesman said.

Pork and chicken facilities including one in Minnesota were also closed by the owner of Pilgrim’s Pride Corp., the second-biggest U.S. chicken producer, said union officials and employees. At least five of the six U.S. pork facilities were cutting back operations Tuesday, according to Facebook posts from those plants.

“There are at least 10 plants I have knowledge of that have had operations suspended because of the cyberattack,” said Paula Schelling-Soldner, acting chairperson for the national council of locals representing food inspectors for the American Federation of Government Employees. She declined to identify the locations.

Chicago cattle futures slumped as much as 3.4% Tuesday, its lowest since Jan. 12, before trimming losses to 1.9%. The potential slaughterhouse closures at JBS plants exacerbated an existing supply glut. The U.S. Department of Agriculture’s midday reports for beef and pork didn’t disclose prices due to “packer submission issues.” However, the CME Group’s pork futures contract jumped by more than 3.5%.

The number of cattle slaughtered in the U.S. fell 22% from a week ago, while hogs were down 20%, according to USDA estimates.

Hackers now have the commodities industry in their crosshairs with the JBS attack coming just three weeks after Colonial Pipeline Co., operator of the biggest U.S. gasoline pipeline, was targeted in a ransomware attack. It also happened as the global meat industry battles lingering Covid-19 absenteeism after recovering from outbreaks last year that saw plants shut and supplies disrupted.

There have been more than 40 publicly reported ransomware attacks against food companies since May 2020, said Allan Liska, senior security architect at cybersecurity analytics firm Recorded Future.

JBS owns facilities in 20 countries. The U.S. accounts for half of the company’s revenue, while Australia and New Zealand represent 4% and Canada accounts for 3%, according to corporate fillings. Brazilian plants are operating normally, a JBS spokesperson said Tuesday by phone.

Backup servers were not affected, and the company is working to restore systems as soon as possible, according to a Monday statement from JBS USA. JBS’s shares rose 2.3% Tuesday in Sao Paulo, outpacing the 1.6% gain for Brazil’s Ibovespa benchmark index.

JBS is the largest Australian meat and food processor with a portfolio of beef, lamb, pork, and value-added branded products, according to its website. It exports to more than 50 countries and its Dinmore facility is the biggest beef plant in the southern hemisphere.

Still, the shutdown is a big concern for exports if it drags on, said Matt Dalgleish, manager of commodity markets insights at Thomas Elder Markets, noting Australia ships overseas about 70% to 75% of red meat products from sheep and cattle.

“Given the size of JBS globally, if they were offline for any more than a week, then we’re going to see disruption to supply chains for sure,” he said.