The Reality of Fur and Leather Farming

Dark Side of Leather Farms 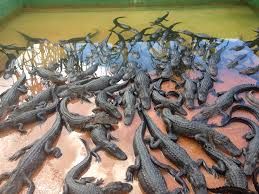 Most leather produced and sold in the U.S. is made from the skins of cattle and calves, but leather is also made from sheep, lambs, goats, and pigs. Other species are hunted and killed specifically for their skins, including zebras, bison, kangaroos, elephants, crocodiles, alligators, ostriches, lizards, and snakes.

Other “exotic” animals, such as alligators and crocodiles, are factory-farmed for their skins and meat. The young reptiles are often kept in tanks above ground, while bigger animals live in pools half-sunken into concrete slabs.

According to Florida’s regulations, it is legal to put as many as 350 6-foot alligators into a space the size of a typical family home. The industry is so large and unregulated in that state that alligators and eggs are often poached for high prices. One Georgia farmer had 10,000 alligators living in four buildings, where, according to the Los Angeles Times, “[h]undreds and hundreds of alligators fill every inch of [each] room.”

Dr. Clifford Warwick, a reptile biologist, says that such confinement can cause injuries and stress. “[Alligators’ and crocodiles’] biology and behaviour do not lend themselves to a captive life,” he says. “To a casual observer—and that often includes the people who run crocodile farms who are not usually scientifically qualified—the animals may seem peaceful and relaxed. But an animal behaviourist can see that they are stressed.”

Although alligators can live up to 60 years, farmed alligators are usually butchered before the age of 2, as soon as they reach 4 to 6 feet in length. Alligators on farms may be beaten to death with mallets and axes, sometimes remaining conscious and in agony for hours after they’re skinned. On alligator and crocodile farms in Texas and Africa, PETA eyewitnesses saw alligators packed in dank pools and crocodiles crowded in barren concrete pits for months or even years before finally being slaughtered for their skins.

An investigation into crocodile farms in Vietnam revealed that animals were skinned alive, and a biologist who viewed video footage of the slaughter concluded that “there was no probability the animals died instantly, and that they likely remained conscious and sensitive to stress and pain for up to two hours after the process.” For more on the appalling conditions in which these animals are raised and/or killed for “luxury” bags, belts, and watchbands, visit PETA.org.

What You Can Do

There are many alternatives to leather, including cotton, linen, rubber, ramie, canvas, and synthetics. Chlorenol (called “Hydrolite” by Avia and “Durabuck” by Nike) is a material that is perforated for breathability and is used in athletic and hiking shoes. It stretches around the foot with the same “give” as leather, provides good support, and is machine-washable.

Leather alternatives can be found just about anywhere you might shop. But some places, such as discount shoe and variety stores, offer larger selections. Designers such as Liz Claiborne, Capezio, Sam & Libby, Steve Madden, and Nike offer an array of nonleather handbags, wallets, and shoes. For a longer list of merchants that offer nonleather products, visit PETA.org.

Although leathermakers like to tout their products as “biodegradable” and “eco-friendly,” the process of tanning actually stops the leather from biodegrading by stabilizing the collagen or protein fibers.

Until the late 1800s, animal skin was air- or salt-dried and tanned with vegetable tannins or oil, but today, animal skin is turned into finished leather with a variety of much more dangerous substances, including formaldehyde, coal-tar derivatives, mineral salts, and various oils, dyes, and finishes, some of which are cyanide-based.

Most leather produced in the U.S. and around the world is chrome-tanned. The Environmental Protection Agency considers all wastes containing chromium to be hazardous. In addition to the toxic substances mentioned above, tannery effluent also contains large amounts of other pollutants, such as protein, hair, salt, lime sludge, sulfides, and acids. A chrome-tanning facility wastes nearly 15,000 gallons of water and produces up to 2,200 pounds of “solid waste” (e.g., hair, flesh, and trimmings) for every ton of hides that it processes.

Among the disastrous consequences of this noxious waste is the threat to human health from the highly elevated levels of lead, cyanide, and formaldehyde in the groundwater near tanneries.

In Bangladesh, which exports leather goods to the United States, chemical exposure and equipment accidents pose such a great hazard that workers (many of them children) aren’t expected to live beyond age 50. The Centers for Disease Control and Prevention found that the incidence of leukemia among residents in an area surrounding a tannery in Kentucky was five times the national average. Arsenic, a common tannery chemical, has long been associated with lung cancer in workers who are exposed to it on a regular basis. Several studies have established links between sinus and lung cancers and the chromium used in tanning. Studies of leather-tannery workers in Italy and Sweden found cancer risks “between 20% and 50% above [those] expected.”

Trees are cut down to create pastureland, vast quantities of water are used, and run-off from feedlots and dairy farms is a major source of water pollution. A California study found that a single cow on a dairy farm “emits 19.3 pounds of volatile organic compounds per year, making dairies the largest source of the smog-making gas, surpassing trucks and passenger cars.”

According to the United Nations’ Food and Agriculture Organization, tanneries have largely shifted operations worldwide from developed to undeveloped nations, where labor is cheap and environmental regulations are lax.

DARK SIDE OF FUR FARMING EXPOSED AT THE EUROPEAN PARLIAMENT 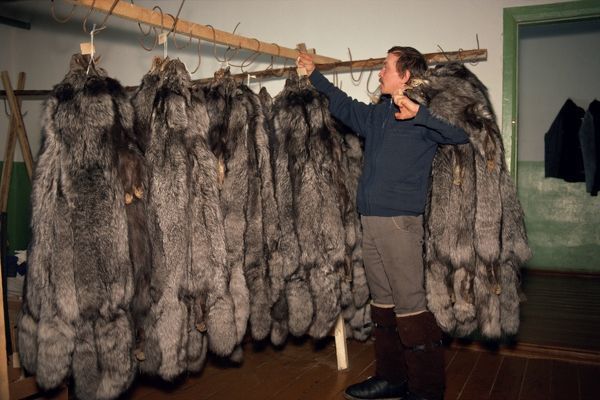 The distressing footage taken on fur farms in France and Finland showed animals suffering numerous, severe health disorders, such as bent feet, obesity, bone deformities, stereotypical behaviour and eye infections. It also showed shocking scenes of animals who have died and been left on the cage floor decomposing, while others either walk over or cannibalise their bodies.

“Wild animals’ behavioural needs can’t be successfully met in captivity. There isn’t good public support for fur farming in Finland – 80% of the Finnish population supports an end to it.”

“Welfare certification schemes like Welfur do not measure or tell us anything meaningful about the welfare of these animals in scientific, absolute terms, they simply measure how farms compare with each other in the context of a fundamentally inadequate farming environment.”