Northern Ireland has become a gateway for an “abhorrent” multimillion-pound illegal trade in puppies in Britain in what has been called the new drugs trade by animal welfare investigators.

A BBC and Ulster Society for the Prevention of Cruelty to Animals investigation found puppies were being bred in the Republic of Ireland and Northern Ireland and illegally moved across to Great Britain through Belfast port to cater for the rocketing demand for pets during the Covid lockdown.

Ch Supt Mike Flynn from the Scottish Society for the Prevention of Cruelty to Animals told BBC’s Spotlight: “For the puppy trade in Scotland, I would say 90% of all problems come through Belfast. To me it’s the new drugs.”

The USPCA believes criminal gangs have swapped their drug trade for illegal pet trafficking, which is estimated to have a value of £150m a year.

Many of the puppies are raised in squalid conditions on illegal farms and are malnourished or diseased and would otherwise not be sold, the USPCA found. The animal welfare charity believes about one-third of the puppies die, disappointing their new owners, who can pay thousands of pounds for a pet.

The USPCA published a report, Puppy Dog Fortunes, exposing the scale and ruthlessness of the illegal puppy industry feeding lockdown demand across the UK. 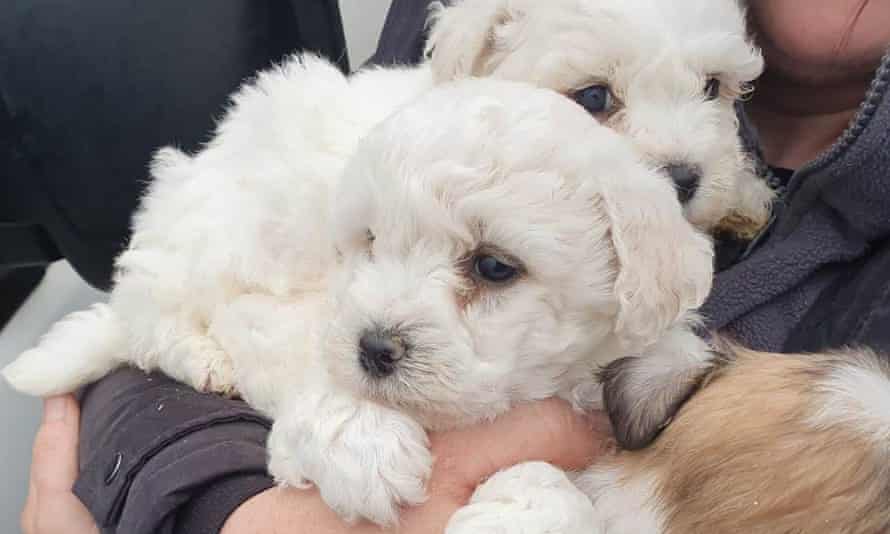 It is thought about 25% of all dogs in Britain were bought during lockdown, with many buyers admitting they did little research into where they came from, according to the Kennel Club.

Northern Ireland’s agriculture and environment minister, Edwin Poots, has condemned the trade as “abhorrent” and ordered an investigation.

Brendan Mullan, the USPCA chief executive, told BBC’s Good Morning Ulster that the organisation’s undercover investigation, which had helped inform the BBC’s Spotlight programme, had evidence of animal traffickers sourcing pups from the Republic of Ireland and Northern Ireland. “We are aware of 20 such transporters doing this. One does 120 dogs a week, and if you take the average price of £1,875 for a pup in GB, that individual has criminal proceeds of almost £16m a year.”

The Spotlight programme showed the dealers exchanging puppies at petrol stations and laybys for onward transport to Scotland.

The BBC undercover team identified one dealer who had sold sick and dying puppies on at least five occasions in Scotland. One of the dogs, bought by the team, was found to have two intestinal parasites, which would make its sale a criminal offence under Scottish law.

“It is causing unthinkable suffering to thousands of dogs and that’s not to mention the people at the other end of the supply chain, the unsuspecting public who have to deal with the human tragedy attached to those sick dogs they have purchased. Every single one of them has underlying health issues. They might look like they are healthy initially, but I can guarantee that they are all going to get ill within weeks of purchase.”

Poots said puppies, including 10 springer spaniels, had been intercepted at Northern Ireland ports, but said it was “not possible nor practical to stop every vehicle moving through Northern Ireland’s ports.”

Puppy Dog Fortunes uncovered 30 unlicensed puppy farms in Northern Ireland, and said the pandemic had “driven some illegal breeders to go to shocking lengths to increase productivity”, including keeping animals in “battery conditions” in cages.

It said the illegal trade was partly being driven by the difference in price between puppies in Northern Ireland and Great Britain, but also said traffickers were able to exploit the absence of Lucy’s law in Northern Ireland, a law named after a King Charles spaniel that suffered multiple health issues after being caged for breeding on a Welsh puppy farm. The law makes it illegal to sell puppies and kittens under six months old through a third-party seller, such as a pet shop or a commercial dealer.