This New 3D Bioprinting Method Could Help Save The 100 Million Animals Tested On In The US Each Year July 4, 2022

Forcing mice and rats to inhale toxic fumes, poisoning dogs with pesticides, and applying corrosive chemicals into rabbits' eyes. These are just some of the procedures happening to animals in the name of science.

Treating and viewing animals as ‘others’ has been ingrained in our society for so long now, enabling humans to ignore that they are sentient individuals who feel pain, fear, and distress - just like us. Although there is a growing recognition of animal sentience, laws are still falling short of protecting most of them, allowing companies to profit from or use their bodies without consent or consideration for the suffering caused.

"We don't kick our dogs at home. Most people aren't abusing animals in labs maliciously either. But for some reason we have no problem making the disconnect between laboratory animals and the animals at home," says Michael Slusher, a former researcher-turner animal rights activist, who wrote the book They All Had Eyes: Confessions of a Vivisectionist, to ‘shed light on some of the horrific and yet accepted animal torture practices with the intention to shut down animal research labs and laboratory animal breeders’.

More than 100 million animals including dogs, cats, monkeys, mice, and rats are subjected to painful tests in U.S. laboratories every year. After being deliberately abused, most of the animals are then euthanized. Methods include gassing, decapitation, breaking the animal’s spine, shooting, electrocution, and brain irradiation. 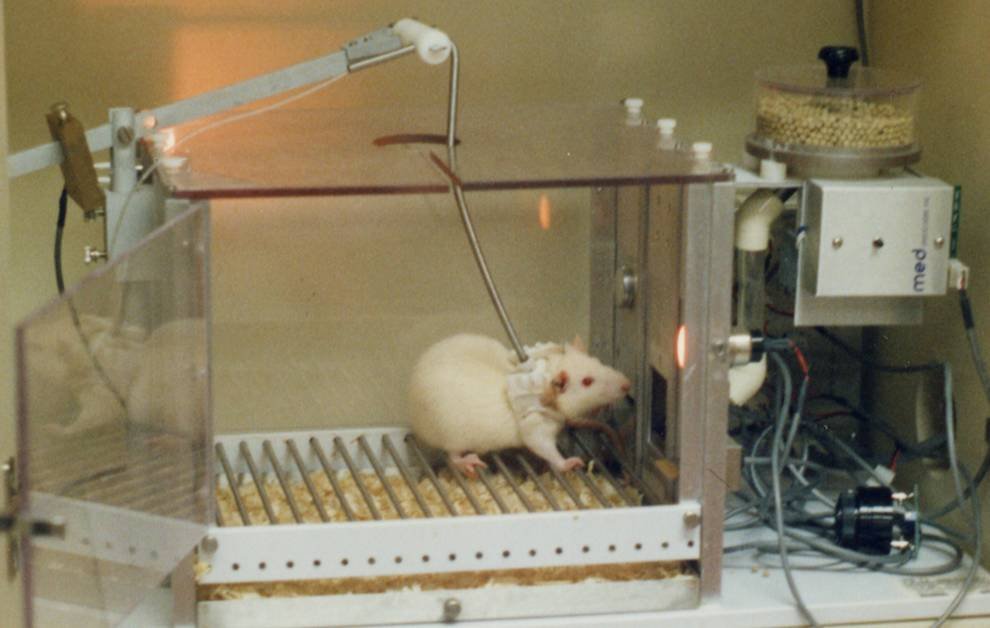 As well as causing immense levels of suffering, animal testing is bad science. The National Institutes of Health (NIH) admits that 95 percent of animal tests fail to translate to humans because the results are dangerous or ineffective.

Each drug represents about a decade of wasted time and at a cost of $2 billion according to the taxpayer watchdog group White Coat Waste Project, but despite this, the NIH continues to dedicate 47 percent of its $32 billion budget each year to animal experiments.

The current reliance on animal testing is harming animals, wasting resources, time and money, and ultimately holding science back. “In the U.S., a major roadblock to medical innovation is FDA red tape that forces pharmaceutical companies to waste years of time and millions of dollars on painful, misleading and outdated drug tests,” Justin Goodman from WCWP told Planet Friendly News, “and doesn’t allow them to use more modern and efficient research tools.” Goodman adds, “these burdensome government-mandated tests on dogs and other animals fail to predict human drug outcomes 95 percent of the time, causing promising drugs to be abandoned, and dangerous ones to reach patients.”

So, What’s The Solution?

New methods to advance science are critical for the health and well-being of animals and humans. And technology is leading the way when it comes to producing more reliable, more precise, and less expensive, results. 3D bioprinting is one of these groundbreaking pharmaceutical methods that could be key to reducing animal testing within experimental medical research. 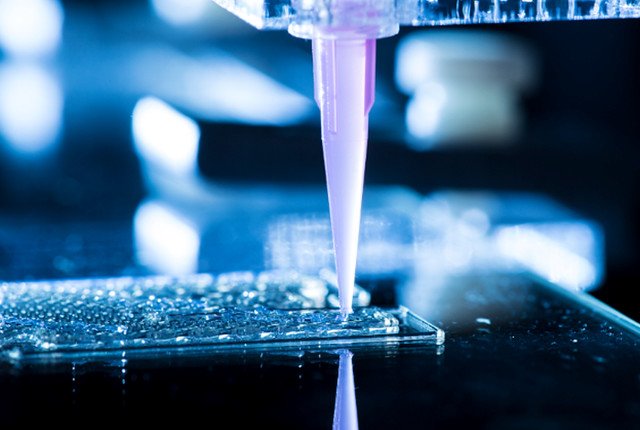 3D printing is a method of creating a three-dimensional object layer-by-layer using a computer-created design. It is being used for everything from innovative food production to recreating declining ecosystems. When it comes to biomedical research, 3D printing can also fabricate human tissue samples. The synthetic organ tissue can accurately mimic human cells' structure and function and be used for lab-testing purposes, replacing the need for animals who would have otherwise been experimented on.

Now, to advance the progress of this promising solution, the Institute of Bioengineering of Catalonia (IBEC) and BRIGHTER (Bioprinting by light-sheet lithography: engineering of complex tissues with high resolution and high speed) is developing new 3D bioprinting processes for tissue engineering and regenerative medicine.

The project is focusing on fabricating human skin using a novel bioprinting technology based on patterned laser light sheets.

“Our innovative 3D bioprinting system not only achieves tissues that are closer to the real ones, but it is also much faster than current systems, a fundamental factor to ensure the viability of the new tissues,” said Professor Elena Martinez, Coordinator of the BRIGHTER project.

Hydrogels play a key part in this technology. Used commercially to produce things such as contact lenses, hygiene products, and wound dressings, the material can also be used in 3D bioprinting to form the base where the cells grow and form new tissues.

Hydrogels have properties resembling those found in the cellular environment in vivo known as the extracellular matrix (studies that are in vivo are those in which tests are carried out on whole, living organisms or cells, rather than a tissue extract or dead organism). This matrix surrounds the cells within the body, providing them with nutrients, tissue-like elasticity, and stability.

The skin made with this new technology can be used by the pharmaceutical and cosmetic industry, and in basic research laboratories. As well as removing the animal suffering, it will be a much more reliable testing system because it is made from actual human cells. 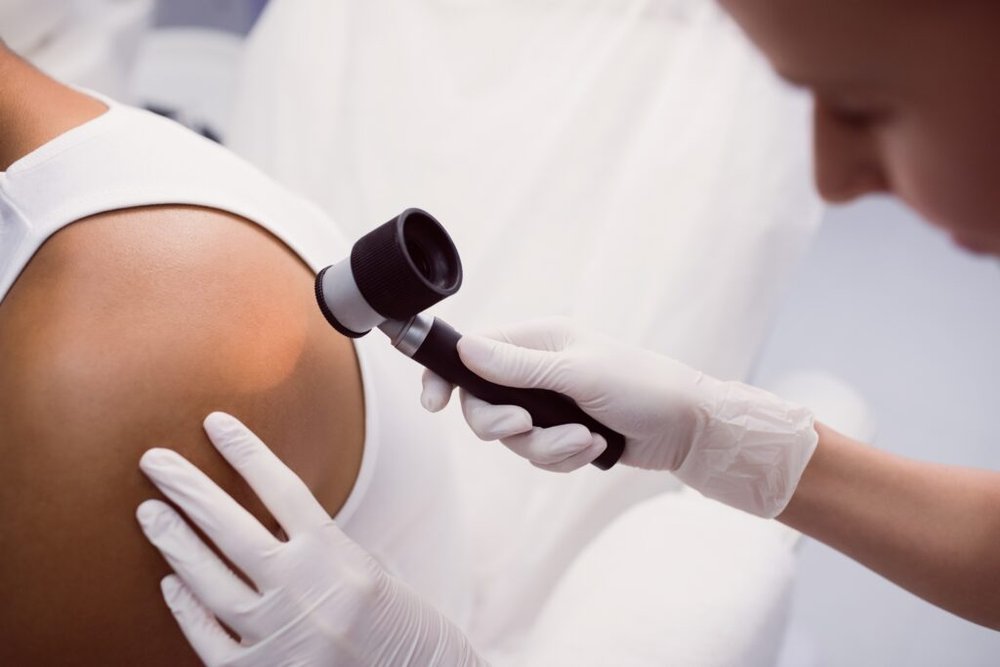 Advantages of this new technology include its ability to mold detail into the tissue being printed, a crucial element when it comes to recreating skin because of its multiple, complex cell types and structures such as sweat glands and hair follicles.

To pattern the cells inside the hydrogels and get the right structure, shape, and consistency, the researchers are using advanced imaging techniques, which combine illumination with light sheets and high-resolution digital photomasks. They do this by applying laser light directly onto a mixture of materials (hydrogels and cells), which also contain molecules that react to light, according to BRIGHTER.

"We hope to be able to print a skin sample with an area of 1 cm2 and a thickness of 1 mm in approximately 10 min and with a cell viability of more than 95 percent, greatly improving current bioprinting conditions," said Dr. Núria Torras, a postdoctoral researcher at IBEC.

Alongside IBEC, Goethe University Frankfurt, Israel’s Technion center, and biotechnology firms Mycronic and Cellendes are also taking part in the BRIGHTER project. The initiative hopes to overcome many of the technical obstacles currently limiting the fabrication of complex human tissues.

Find out more on how campaigners are working to change the system and stop animal tests: listen to our podcast episode  “Tax Payer Funded Torture” with Justin Goodman of The White Coat Waste Project here.