US Postal Service worker mauled to death by dogs in Florida, officials say

A U.S. Postal Service worker was mauled to death by a pack of dogs in northern Florida earlier this week, authorities said.

The mail carrier -- identified as 61-year-old Pamela Jane Rock of Melrose, Florida -- was in the Interlachen Lake Estates area of Putnam County on Sunday afternoon when her delivery vehicle broke down and she was attacked by at least five dogs. Residents, including the dogs' owner and several neighbors, heard the woman's cries and rushed to help, according to Col. Joseph Wells, chief deputy of the Putnam County Sheriff's Office.

"One of the neighbors even brought his firearm along and fired several shots into the air and to the ground in an attempt to disrupt the attack," Wells said during a press conference on Tuesday. "That was unsuccessful, and it was the neighbors and the owner that were able to physically remove the dogs from the victim."

When deputies arrived on the scene, the owner had already secured the dogs back on their property while Rock was still lying in the street and bleeding heavily. The deputies provided first aid to the victim and applied three tourniquets to stem her blood loss until an ambulance arrived. As she was being transported to the nearby Putnam Community Medical Center in Palatka, Rock went into cardiac arrest but paramedics were able to revive her. She was later transferred to UF Health Shands Trauma Center in Gainesville, where she died on Monday evening, according to Wells.

"The investigation is very active at this point," Wells told reporters. "We are in frequent communications with the state attorney's office as we explore options as far as possible criminal cases as this case continues."

"Because it's a death investigation, it does now fall to the state attorney's office homicide investigative unit as we explore possible criminal charges," he added, without specifying what those charges could be.

An initial investigation revealed the dogs had escaped from a fenced yard by moving rocks that were lining the bottom of the fence, according to Wells. 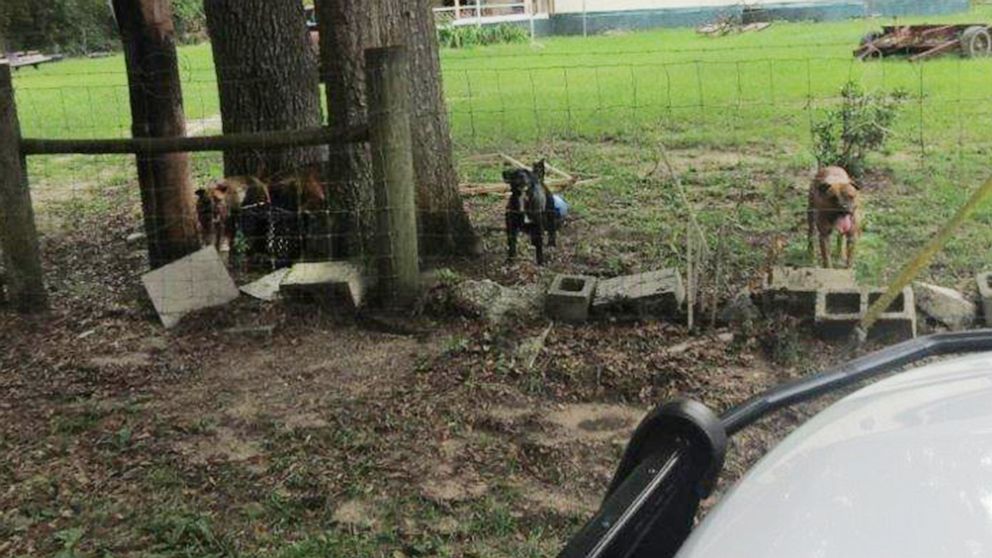 This photo released by the Putnam County Sheriff's Office shows dogs that were allegedly involved in a deadly attack on a U.S. Postal Service worker in the Interlachen Lake Estates area of Putnam County, Fl...Show more

Putnam County Animal Control also responded to the scene and took custody of the five adult dogs that witnesses identified as being involved in the attack. The dogs, described as mixed-breed, will be euthanized at a later date, Wells said.

The Putnam County Sheriff's Office did not release the name of the dogs' owner.

In the past three years, the Putnam County Sheriff's Office has responded four times to the neighborhood for animal-related calls, according to Wells.

"We are doing the investigation now to confirm that they are related to this address," he told reporters. "Early indications are that at least two of those previous calls were related to the same address but not confirmed the same dogs."

A spokesperson for the U.S. Postal Service told ABC News in a statement on Wednesday that the agency "is deeply saddened at the loss of our employee."

"A postal family member lost her life in a dog bite attack," the spokesperson said. "Our thoughts and prayers are with her family and her co-workers at this time."

More than 5,400 postal employees were attacked by dogs in the United States in 2021, according to data released by the U.S. Postal Service in June. The data showed Florida was among the top 10 states for dog bites, with 201 incidents reported last year.

"Our carriers are trained to use their mail satchel as the first line of defense, which can be wielded like a soft shield, and they are equipped to carry pepper spray. If a loose dog is known to be on the carrier’s delivery route, the address can be programmed into their delivery scanner, and an alert will pop up when they approach that area to warn them," the spokesperson added. "Unfortunately, attacks such as this provide the Postal Service an opportunity to remind dog owners that it is their responsibility to restrain their pet in order to avoid attacks against our employees while they are in performance of their duties."