On November 1, COP26, the United Nations’ annual climate change conference, will kick off in Glasgow. Over the course of 12 days, the conference will unite nations, businesses, and citizens alike to discuss one of the most urgent issues facing the planet: climate change.

In 2015 at COP21, the Paris Agreement—a commitment from countries across the globe to take action to limit global warming—was born. As part of the agreement, countries agreed that every five years they would come back with an updated plan reflecting how they will lower their carbon emissions. (Last year’s conference was canceled due to the global pandemic, so that’s now happening at this year’s conference.)

Several countries, including top contributors to global carbon emissions like the U.S. and China, have made commitments to drastically reduce emissions but truth be told, few world leaders have little decisive action to show for the planet six years after the Paris Agreement was signed. Bold statements have been made, sure. (Biden announced that the U.S. would halve its emissions by 2030.) Commitments have been made to pivot away from fossil fuels and lean into renewable energy and promote electric cars. But many of those promises are vague. And while countries fail to meet their emissions targets, the clock keeps ticking, the summers keep getting hotter, and storms continue to hit us with unprecedented severity.

World leaders and COP26 are missing the point: Animal agriculture needs to be central to all conversations concerning climate change. Its effects are already devastating parts of the world. Leaving this focus out, or ignoring it altogether, is not just an oversight, but deeply irresponsible.

This year’s conference appears to have left animal agriculture out of the conversation. (The goals section of the website does, however, call for phasing out coal, investing in renewables, switching to electric vehicles, and reducing deforestation.) And climate activists have taken notice. Recently, 53 NGOs, including Humane Society International, ProVeg International, the Center for Biological Diversity, the Harvard Animal Law & Policy Program, and more wrote to British politician and COP26 president, Alon Sharma, urging him to formally acknowledge factory farming’s impact on the planet in hopes of encouraging world leaders to take the decisive action needed to steer us away from destroying the planet to the point of it being inhospitable for future generations.

The letter urges COP26 to address these urgent areas, which would be a clear signal to governments around the world to take action on the climate crisis. “Working with farmers to support and catalyze a shift towards more plant-centric food production and consumption is a proactive step that must be taken to future-proof global food and agricultural industries … We call on the UNFCCC to formally and publicly recognize the role of animal agriculture as one of the largest contributors of climate change and to open a greater space for dialogue.”

Sounds reasonable, right? Here are three reasons why COP26 should put animal agriculture on the agenda: 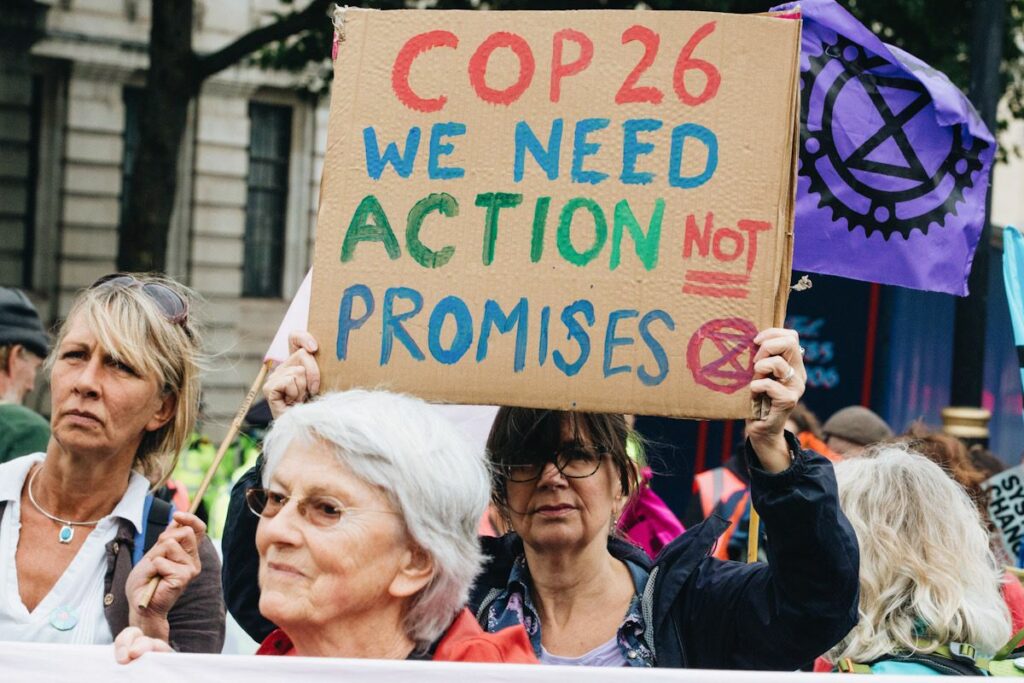 The activist group Extinction Rebellion gathers at the Impossible Rebellion protests on 23rd August 2021 in London, calling for leaders at COP26 to take action. | Mark Kerrison/In Pictures via Getty Images

Animal agriculture is a top contributor to greenhouse gas emissions

According to the Food and Agriculture Organization of the UN, animal agriculture contributes to roughly 14.5 percent of anthropogenic global greenhouse gas emissions. These come not only from the animals themselves but also from deforestation to make way for pastureland. Not only that, but it also requires vast resources in order to function–far more than the planet can sustain as the global population grows, according to scientists. The pollution that comes from these farms also happens to be hazardous in other ways, contaminating the air and water of nearby towns. Factory farming has been left out of many nation’s climate change plans and it’s high time that it becomes a mandatory part of any plan having to do with reducing greenhouse gas emissions. Overlooking animal agriculture and focusing only on renewables is short-sighted and statistically impractical when it comes to emissions. Opening the discussion on pivoting toward a more plant-forward food system is a critical part of the conversation.

Governments and corporations need to act, not just individuals

As the UN’s own climate report recently revealed, change needs to come from all aspects of society. This means that nations need to include animal agriculture in their plans (and they need to put those plans into action) and that we as individuals can also take action by leaving the world’s most unsustainable foods off our plates.

Many parts of the world are beginning to experience the effects of climate change via hotter summers and more severe storms. But, things are only going to get worse if governments continue to sit on their hands and lament the tragedy of what humanity has done to the planet. And while many of us will be gone as more extreme weather events begin occurring, the same can’t be said of the younger generations who had little to no say in the actions that have brought our environment to its current state. The future literally depends on all of us.